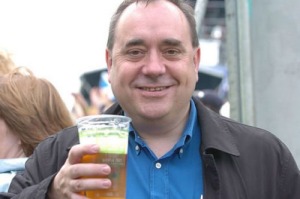 It was a bitterly cold Hogmanay eve morn and Alex Salmond was hard at work at Holyrood, under the watchful eye of his boss, Donald Trump…the meanest man in all of Scotland (a feat on par with being the wettest fish in the ocean).

“W…w…will it be alright if I take this afternoon off?” asked Alex after he had delivered permission for a particularly good golf-course to Mr Trump.

“A whole afternoon off?” bellowed Trump, his face as red as a Momentum agenda.

“If it’s not a problem,” spluttered Alex, “You wouldn’t need to pay me,” he added.  When no answer was forthcoming he started to blather, “Only Nicola has arrange a stellar Hogmanay line-up, with the Krankies and a video message from Sean Connery in LA…and Tiny Wings did so want to see it.  And you know it will be hard for him to get there, because he can’t walk all the way from Bath, and…”

“ENOUGH!” yelled Trump so loudly that the signed photo of himself on his desk fell over.  “Very well, Salmond, you may have 2 hours off -without pay- to go and see in the new year if you can finish 100 ‘Better Together!’ posters before you leave.”

Alex thanked Mr Trump and returned to his desk. “A bonny Hogmanay I’ll have, with my hand nipping like a Govan housewife’s face,” he muttered to himself, but he knew to expect no better from Mr Trump.  At least he’d get to spend a couple of  magical hours with Tiny Wings, watching the fireworks that Nicola had spent the bridge maintenance budget on.

It was proper dark by the time that Donald made his way to the front door of Trump Towers in Leith.  As his bitterly cold fingers fumbled with his keys he reflected how wise his decision to fire the doorman had been.  “I’m not paying somebody £6.50 and hour to stand around doing nothing but holding doors open,” he chuckled to himself, “Ha!  Classic Trump!”

The chuckle frozen in his throat as a ghostly face emerged from the gold-plated door and stopped nose-to-nose with his own visage.  Before Trump could even scream the apparition vanished, leaving him staring at only his own reflection.

“I’m working too hard to compensate for that lazy wind-bag Salmond!” Trump told himself, shaking his head and resolving to think no more of the matter.

True to his word less than an hour later Donald was wrapped in his Labrador-skin dressing gown, sipping a glass of warm milk (never, as his doctor attested, using alcohol at all).  Lost in a revere of his tremendous debating wins it took him a little while to notice that something else was moving in the room.

In front of him stood a gaunt and harrowed figure, swathed in chains as weighty and leaden as Mhairi Black’s maiden speech.  Trump shook in horror, for the figure was one he knew.

“Jim?  Jim Murphy?  My old friend?” he asked, his voice a terrified whisper no louder than a small mouse’s fart.

“Aye, Donald, it’s me.” replied Murphy, his voice as cold and dead as a promise to use tax revenue powers to reverse austerity.

“But you’ve been dead these eight Hogmanays past!”

“Indeed I have, Donald, and let me warn you now that death is a mighty torment, given the state of the party I loved.”

“Can you not gain some relief by casting off those chains? They look to be a terrible burden.”

“Indeed they are, Donald, but these are the chains I forged in life, links by links, so now I am cursed to bear them.  Your own chains were as long and as heavy as these when I died, now they are 8 years longer and monstrous to behold.”

On hearing this news the glass of milk dropped from Trump’s hand and he himself sunk to floor, on his knees before the shade of his former friend, wringing his hands.

“Murphy, in the name of the friendship we once shared, can’t you tell me how to spare myself of this fate?” he begged.

“That is my purpose here tonight, Donald.  You will be visited by 3 ghosts.  Listen to what they have to say, watch what they have to show you, do not try to solicit investments from them, and there is a hope, a hope as slim as the Scottish vegan cookbook, that your soul may yet be saved.”

Trump stayed on his knees, his head bowed for some minutes.  When he finally raised his eyes the apparition was gone and by the time he’d ordered a new cashmere rug to cover the milk stain he was convinced in his own sound mind that he had slumbered and dreamt the whole affair.

“I shall retire to bed early,” he said to himself, “And if the Scottish Government wakes me with their damn fireworks I’ll see them in the Supreme Court tomorrow morning!”

Having so said, and being an internationally renowned man of his word, he did that very thing and soon was fast asleep.