Last month, in response to a suggestion by Daniel Hannan (a man who always justifies Brexit with the air of an undergraduate who, after a pint of cider, will propose betting £5 that he can convince you that Stalin would have excelled in Mrs Thatcher’s cabinet) that post-Brexit it was in the EU’s interest to maintain the status quo and continue to allow us access to the single market, I wrote the following: 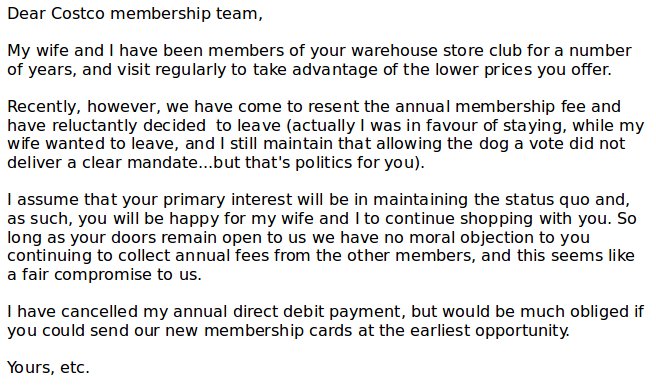 That was just a silly joke, but the more I thought about it the more I realised that Costco isn’t just the perfect analogy for the EU, but they should be running the EU.

I don’t think the EU is perfect and neither is Costco, but the way they’re imperfect is magnificent and utterly loveable.

My local store – the only one I’ve ever been to – opens with TVs.  A giant, concrete-floored warehouse with shelves towering 30 feet above you, surrounded by the largest TVs available to humanity, is the worst possible space imaginable to gauge what size TV will fit in your home.  I can cheer myself up on any visit to Costco by speculating that anybody who actually buys a TV there finds themselves leaving with something they believe to be the size of an old B&W portable and arrives home to find they actually have a telly that’s 80% of the size of the wall they’re planning to mount it on.

It’s not just imaging the misfortunes of others that makes Costco great, they also make trade fun.  Like the EU they may have commerce as their lifeblood, but they rise above the ordinary, everyday shops.  Some of their produce is cheap if you buy in unimaginably large qualities and, unlikely as it may seem, there a certain happiness to be had from being in a position to think, “I feel a little flush this month…I might pop out to Costco and buy myself a decade’s worth of toilet paper.”

A lot can happen in 10 years, empires can rise and fall, but you can face it all knowing that, whatever else, you won’t have to wipe your jacksie with a cardboard tube, so you’ll reach the end of it both spiritually richer and financially better off.

One of my favourite moments in Costco was seeing, about three shelves up, a cardboard box the size of a double-bed, upon the side of which was printed the legend, “King Edwards – Entire crop”. How hard-hearted would you need to be not to love that?

It’s not just about bulk buying at low prices, of course.  Some things – especially meat – aren’t any cheaper than you could buy in a supermarket, but are higher quality.  This is how regulation should be – you pay a little more than you absolutely need to, but you get something that’s better.  The EU finds this the bane of its life, but in Costco literally nobody is standing by the meat counter shouting that they want cheaper stuff that isn’t as good.  Why?  Well perhaps its because if you stand next to a chiller full of beautiful steak shouting that you want cheap crap then you sound like an idiot.  The EU needs a few more people donning hairnets on a Saturday to hand out free samples of its best produce to convince everyone that premium products are best.  If nothing else it will breed a new generation of support, because my kids – who react with the suspicion of Kurt Gödel if they’re given anything slightly different at home – will happily down plastic beakers of lilac scented fabric softener if it’s been given away free at a Costco stand on a Saturday.

The children are our future…the ones who’ve OD’d on Comfort less so.

Finally there are things which are neither cheaper nor better than their equivalent in Tesco. I’m thinking mainly about alcohol here. You can buy the same drinks at probably a slightly higher price than, say, Asda.  Crucially, however, nobody in Costco judges you if you happen to be buying 24 bottles of whisky and one of their giant pizzas.  This tolerance of any and all is as central to the Costco experience as it should be to the EU.

Take the issue of the burka – in Costco it’s a non-issue because literally no living person owns any combination of clothing that is not appropriate for shopping in Costco.  You feel uncomfortable seeing somebody wearing a burka in public? Just move to the next aisle, where a man in a Winnie-the-Pooh adult onsie is arguing with a woman in an evening dress about whether the TV in their trolley is too large to fit into their flat.  You can’t walk around Costco thinking, “They look strange”, because you’d literally never to the tills, and that means a decade of having to wipe with double-glazing fliers, that are far too shiny for that purpose.

There you have it, then.  Costco have a model where you pay to be a member and, in exchange, you get no-nonsense trade of spectacular breadth.  Which other single store could you wander into and come out with a whirlpool jacuzzi, a 6ft tall teddy bear, 5Kg of oranges, a set of tyres for your car and a new pair of glasses?  And no-one complains.  No idiots write letters like the one at the start of this blog demanding they’re allowed to trade without paying to be a member. Nobody harangues the doorman, demanding to be let in without their membership card.  Nobody says, “Well, actually, I don’t like the giant hot-dogs, actually, so I should get a reduction in my membership fee, actually.”

It all just works.

I neither know nor care who the faceless, unelected, unanswerable bureaucrats behind Costco are, but we desperately need them running the EU – something else we need to just work.