What does the result of the Richmond by-election tell us?

It tells us that Sarah Olney, of the Liberal Democrats, will now be a member of parliament, as more of the people who voted voted for her than anybody else.

What now for Zac Goldsmith?

In the immediate future he’s going to have to stop attending the House of Commons and calling himself an MP.  In the longer term he’s probably going to have to get a different job. Hopefully one he’s good at.

What does this result mean for Labour?

It means that their candidate won’t be an MP, because only 1,515 people voted for them; far fewer than the number required to win.  In parliamentary terms this means that Labour now have exactly the same number of MPs as they had yesterday.

Who are winners and losers?

In a very real sense Ms Olney is the winner, and this was confirmed by the returning officer.  Zac Goldsmith and the 6 other candidates who stood are the losers, but in a larger sense the losers are those who predicted that either Ms Olney would lose or that somebody else would win.

What does this mean for Brexit?

While the Brexit process is far from clear this result has clarified that the parliamentary part of that process will involve at least one more Lib Dem MP and one fewer Zac Goldsmiths.

Is this the start of a Lib Dem revival?

Because of direction of the arrow of time it is literally impossible for us to be sure.  Mathematically we can be certain that, between yesterday and today, the number of Liberal Democrat MPs has increased by 12.5%.  Were that rate of growth to continue then, by Christmas, there would be 135.13 Lib Dem MPs.  Politically, however, this is unlikely.

Is it too early to start making predictions for the next general election?

No. If a general election were to take place the point we’ve labelled ‘Observer’ on this diagram then, as you can see, all predictions should be made within the past light cone. 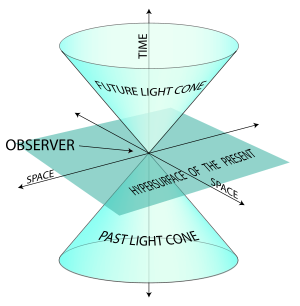 Predictions made within the future light cone would fail the acid test for predictions, i.e. they must be about something that is going to happen, rather than something that has already happened.

What does this result tell us about future by-elections?

They will also be decided based upon who gets the most votes.

Is this result vindication of my personal theory on politics, identity, society, power, polling, Brexit, Heathrow, London’s place in the world or racism?

4 thoughts on “Richmond: The facts!”