The sad, mad Things in the Dungeon Dimensions have no understanding of the world but simply crave light and shape and try to warm themselves by the fires of reality, clustering around it with about the same effect—if they ever broke through—as an ocean trying to warm itself around a candle.

There’s a time and a place for the question, “What is a woman?”

For example, in my Star Trek fan-fic, where Kirk finds himself stranded on some idyllic alien planet and resigns himself being stuck there for the rest of his life, and then asks one of the natives, “Say, where are all the women?”. As a reply, “What is a woman?” is going to be pretty devastating.

Or maybe at the WI, that time that Liz got her boiled sweets mixed up with her medicinal marijuana, and the whole group are into their third hour of eating jam straight from the jar, chatting shit, and making up dirty lyrics to Jerusalem.

On Twitter, though, where replies are limited to 280 characters and 4 pictures, it’s not such a great question, and perhaps that’s why the people so intent on redefining the term haven’t come up with a good answer yet.

If you’ve spent any time debating this, or watching others debate it, you’ll know the re-definers’ attack on the definition of womanhood is supported by a debating tripod – a compound of ‘trip’ and ‘OD’, two terms meaning to be out of your fucking skull. 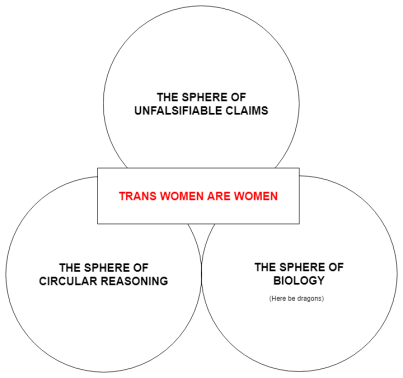 Obviously, not every definition fits neatly into just one of these categories, many of them also fit into the much larger, overarching, category of ‘Absolutely irrelevant’

Take, for example, the claim that trans women’s brain scans show them to be more similar to women than men. This claim would seem to lie mainly in the sphere of biology, but when you think about it it’s also circular reasoning.

Why? Well, if brain scans, and not any other factor, is what splits men and women, then how do you have a control group that contains people you know to be men or women? You can’t, without a brain scan. At best you end up with two groups, A and B, with each group being defined by some common similarity, and which you can arbitrarily label ‘Men’ and ‘Women’, but you wouldn’t know which was which.

You could resolve this by saying that the men are the ones with penises, except that’s exactly the kind of rational thinking that you’re trying to get away from, by paying all this money to rent a brain-scanner (Also, I don’t know if penises show up on brain scans. My guess is that if they do you’ve probably calibrated something incorrectly)

What then makes it irrelevant is that the anti-sex league don’t want to use brain scans to determine who’s a woman and who isn’t, any more than they care what chromosomes a person has, or whether gender dysphoria is a mental illness, or what sea-horses do in order to get little sea-horses (sea-foals?). If some genius announced tomorrow that they’d come up with a scientific, 100% accurate test to determine if someone was trans or not then, by the end of the day, their weighted-down body would be being slung into deep water somewhere remote by the nobble committee.

Their goal is that everyone who says they’re a woman is a woman, therefore any definition of women that doesn’t include everybody is (or will be) a TERF position.

Look at how many thousands of words have been written in the sphere of biology about intersex people. Textbooks worth of arguments about what disorders of sexual development are and aren’t, PhD mocking PhD across the swamp, high profile cases dismantled…and yet nobody’s saying that you have to have a DSD to be trans, or that everybody with a DSD is trans.

This is why the sphere of irrelevant crap is so huge, because every battle is being fought exclusively in the no-woman’s land, remote from the TRA’s position of “Women are whoever we say they are.”

The problem with that position is that it makes women everyone. Like making the VIP section in a posh club inclusive, by opening it to everyone, making everyone potentially a women destroys that which is coveted.

There are men who genuinely want to be women. Who want to live as women. Who want to be seen as women by the world. The trans-rights movement is working counter to their interests, by pursuing a course that will render the term ‘woman’ meaningless. A term crouched in pseudo-biology, endless circular logic and unfalsifiable claims of gendered souls and such. All supported by people who desperately want to believe that the cause they’ve sided with is, somehow, grounded in rationality.

It is not. Intentionally or otherwise their cause is to destroy womanhood. Because the ocean can’t warm itself around the candle.