Paul Mason, who used to be a serious journalist before catching a bad case of Corbynitis, has written his overview of the Stoke and Copeland by-elections. As you’d expect it’s an inconsistent, blame-deflecting piece of near gibberish. Let’s take a look.

For socialists in the Labour Party it will be a relief that the Blairite plan to stage two electoral disasters on one night failed.

And we’re off. It was always a Blairite plot, obviously…pretty much everything is. What Paul’s missing out on from the start is that for this Blairite plot to succeed it would need Labour to be doing terribly in the polls. Which they are. Also because of Blairites, probably.

It seems to be Corbyn’s curse that he’s haunted by this shadowy group who are so powerful that they can cause the party electoral misery, yet aren’t powerful enough to oust him from the leadership.

Nobody can claim losing Copeland was Jeremy Corbyn’s “fault”

Actually, plenty of people are claiming just that. They could all be Blairites, I suppose.

However the two by-election results taken together do reveal a big and challenging fact for Labour: in these two very different working class English seats, there is a majority for Brexit, and for the right wing nationalist rationale behind it.

This is a brave paragraph to write when you’re defending Corbyn, who has supported leaving the EU for his entire political career, gave a lukewarm defence of it as part of the official Remain campaign, called for article 50 to be invoked the morning after the referendum and issues a 3-line-whip to his own party to support the government’s Brexit bill.

I wonder if all of that’s going to come back to bite Paul’s bum later in this very article. I just wonder.

Both by-elections saw significantly reduced turnouts compared to a general election — from 64% to 52% in Copeland and from 50% to 38% in Stoke. Therefore all talk of “swings” has to be tempered by the fact that, in both places, it became a question of whose vote would hold up most.

In other words, after months and months of telling us that polls aren’t accurate, Paul is adding, “…and neither are by-elections.

Paul then goes on to talk about the absolute number of votes decreasing for UKIP in both Copeland and Stoke. He literally does this immediately after saying that turnout is down, presumably to gloss over UKIP increasing their vote share in Stoke by 2%, despite their candidate being “a hapless fantasist” (ibid).

People are voting Tory in the full knowledge that the NHS is collapsing, being privatised, that refugee children are being left molested at Calais and that a bunch of Tory incompetents are in charge – because they want Brexit.

Why, oh why, won’t those people vote for a Labour incompetent who also wants Brexit? We may never know.

Copeland has been moving for more than a decade towards being a tight seat for Labour: part of the longterm fragmentation of Labour’s demographic base.

Labour has 26 seats more marginal than Copeland was,. More than 10% of their parliamentary presence!

It’s the kind of place Labour can win back at a general election, but — as with other military-industrial complex centres — that is hard with a longstanding pacifist leader.

“By overcoming our leader’s short-comings we can win back marginal seats!” is possibly the worst battle-cry for a general election ever. “Only cunts vote!” would probably work better.

Without a majority in Scotland, it can only ever form a Labour-SNP coalition, for which there is untested consent among its core English voters.

The consent is so “untested” that the Tories used the possibility of a Labour-SNP coalition government as one of their major lines of attack in the 2015 general election.

It’s also writing off Scottish Labour as irrelevant and inconvenient, which is hardly a wise thing to do to your own party.

In fact, even Corbyn is against an alliance with the SNP, so this is dangerously close to breaking ranks for Paul.

If you add to this the fact that Labour’s members have twice elected the most left-wing MP in the party to be its leader, shattering its effectiveness as an opposition (through infighting and sabotage)

And I’m not sure this was the decisively pro-Corbyn argument he thought it was either.

Paul then rattles on for a bit about the Labour need for a clear Brexit plan, which is fine, but rather too late.

My position, repeatedly outlined, is that Labour should accept Brexit but fight for Britain’s membership of the single market, via EFTA, with a temporary brake on free movement. If we don’t get that, then at the end of the Article 50 negotiations I would be in favour of a clear vote against the Brexit plan the Tories bring to the UK parliament in 2018–19.

This is the champion for left-wing Labour, a man who hates Blairites for their compromises, saying that Labour should accept something which, in same article, he describes as having a “right wing nationalist rationale”.

He also doesn’t seem to care that a vote against the government’s Brexit deal won’t mean no Brexit, just no deal – with the economic and social chaos that would entail.

He then immediately follows this up with…

In that situation (which is likely) I would also not only accept but propose Scotland secedes from the UK to save what it can of a socially just society from the wreckage that hard Brexit would bring.

Having argued, only 6 paragraphs previously, that Labour could only gain power through coalition with the SNP he now proposes a move that would remove the SNP MP’s from parliament. He’s a man whose just had one leg blown off, desperately trying to hacksaw through the branch that he’s using as a crutch.

If anything, the Labour position was not critical enough of Europe in the Brexit referendum campaign. We do not and cannot share the starry-eyed infatuation of the middle classes with the EU and we should not feed the illusion that the decision is reversible by overriding democracy.

“Labour didn’t do enough to support the right-wing nationalist rationale!”

The pressing issues for Labour’s leadership today should be to understand the long-term and grave nature of the Brexit crisis and seek to construct an alliance around the project of a soft Brexit with maximum social justice.

Compared to what the Tories and their press backers want, that will still seem like a radical project and grounds for the continued monstering of Corbyn by the right. If the rest of the hard neoliberal Blairite faction wishes to follow Jamie Reed and Tristram Hunt out of the commons, or even into the Libdems, that might actually help the situation.

So the secret Blairite plot that you started this article with was actually helping Corbyn?

I’m confused, are Blairites the goodies or the baddies?

Labour did deploy radicalism and class rhetoric in Stoke to see of UKIP, together with efficient traditional activism.

It wasn’t down to the “hapless fantasist” that UKIP fielded, then? Because before you made it sound like it was. Plus, remember that UKIP increased their vote share in Stoke…unless we’re not counting that, because of the low turnout.

But neither in Copeland nor Stoke was Labour displaying radicalism at the level we’re going to need to take power in what’s left of the UK, after the right wing nationalist middle class has destroyed it.

Because, obviously, the traditional way of voters showing annoyance at your lack of radicalism is by voting for the governing Conservative power. After “the polls are wrong” and “by-elections are wrong” we’ve finally reached “the voters are wrong”. Paul is so convinced, so absolutely, unshakably convinced by the rightness of Corbyn’s message that even the clearest rejection of it shows only that those rejecting it are wrong.

So I will not be joining those calling on Corbyn to resign for losing Copeland. Jamie Reed lost Copeland.

I guess that if you really wanted to make it all Jamie Reed’s fault you’d probably want to build a narrative about how he’s let down the voters in Copeland, but Mason hasn’t bothered with that, he’s just blaming everyone and everything that comes into his tin-foil-hat clad head.

But turning 68 this year, Corbyn can only ever be a transitional figure in Labour politics.

“I will not be joining those calling on Corbyn to resign, but he is old and should retire, or die, or something.”

None of the things he [Corby] lacks — “pazzaz”, office management skills, a posh accent, an extensive network of friends in Fleet Street— would have won Copeland for Labour last night. Nor was his leftism a liability: orare we going to say Copleand voters were turned off because he didn’t attack the NHS enough, or migrants, or benefit scroungers?

No, but we might reasonably say that his Brexit stance, his well-documented dislike of nuclear power and that he’s a complete political ineptitude might have put a few people off.

On the left in Britain we need to find a way for the left and centre left to co-exist within the same Labour team, to respect each other’s ideologies and combine their strengths. And to build a Progressive Alliance to tactically manouver inside the electoral system.

Naturally the conclusion of an article that starts with a denouncement of a Blairite plot, implies abandoning party colleagues in Scotland, encourages neoliberals to leave the party and then blames one of its own MPs for losing a by-election, is that Labour should come together and respect different ideologies.

This isn’t, then, a thoughtful analysis of the results of last night’s by-elections, but an exercise in throwing every excuse imaginable at the reader, in the hope that they’ll buy one of them. As such it reminds me of nothing more than the famous scene in The Blues Brothers, where Jake is finally cornered by his ex-fiance, and carries exactly the same message. 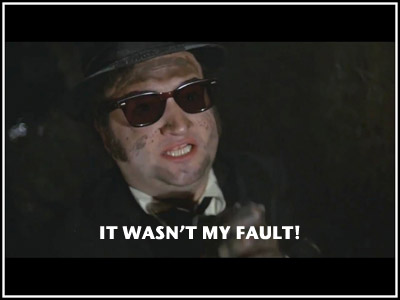 I think others may disagree, Paul.

One thought on “Masonic Grudges”