In the past couple of weeks the ever-growing sphere of trans-rights activism has intersected with the public consciousness in three particular battles; one new, one old and one on-going.

The old battle has been the final conclusion of the British Columbia tribunal hearings, brought by Jessica Yaniv against beauticians unwilling to provide waxing of her genitals. The case hasn’t exactly been a towering success for Yaniv, with paragraph 109 of the judgement openly saying that the motivation for bringing the cases was personal financial gain and racism.

The battle that’s been rumbling on for a while surrounds abrasive and abusive cycling champion, Rachel McKinnon. Several sources were ratio’d to hell when they reported her winning a world record spring time in women’s cycling.

The new entry came from across the Atlantic, from the New York Democrats. A rule that required districts, electing two members of the state committee each, to elect one man and one woman, was changed to a requirement for two people of different genders. This rule was proposed by 20-year-old Emilia Decaudin, who came out as non-binary 3 months ago and was, as many people noticed, very happy to be there. 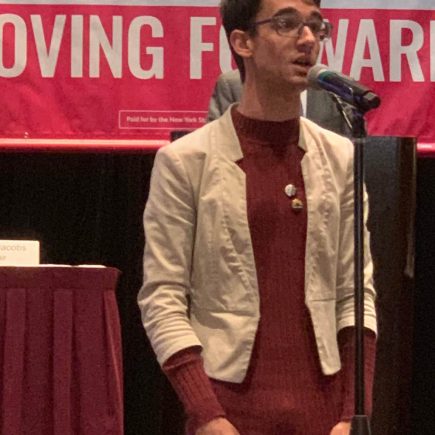 In each case public opinion wasn’t so much against trans ideology as genuinely flabbergasted that any of this was being taken seriously. And yet, still, trans-rights activists leapt to the defence in all cases. Even racist scammer, Jessica Yaniv, was defended by prominent trans-rights activist, Morgane Oger, who blamed lawyers in the case for digging up dirt on Yaniv.

Why defend these cases? Nobody hearing about these issues for the first time this week is likely to think that Yaniv is a nice person or that McKinnon, who is well off the pace for a man of her age, setting world best times in women’s cycling is fair, or that a political party electing two white men, one of whom dresses unconventionally for their sex, is increasing inclusivity. Why not accept some battles as lost, move on, and try to win the war over public opinion?

The answer is “Trans women are women” – the “Four legs good, two legs bad” of trans-activism.

As bedrock goes, it is feeble. The assertion doesn’t stand up to the slightest scrutiny. The only hope that it has of supporting not only a movement but also huge and sweeping social changes is for it to be unquestioned. By design or by accident it has almost succeeded. You can easily get yourself called any number of hurtful names by saying that trans-women are not women. Any attempt to pick at the logic of the statement which, coupled with the push towards uncritical and uncontestable self-identification, does literally say that men who have uttered the magic words “I am a woman” are women, will have you added to block lists and, if you’re an actual women, bullied and vilified.

So, instead of any sort of constructive efforts to deescalate the increasing tensions between the gender-critical and the trans-rights activists, we get the latter fighting ridiculous battles, to support the most extreme edges of their movement. Then, to justify this, the same extremism has to be projected onto the gender-critical movement. Women who have been fighting to overturn gendered expectations and make sure human rights apply to all for decades are accused of wanting to erase trans people and of being either fascists or in league with them.

So divergent from reality is this projections that the only way it can be maintained is to stop women speaking about gender-critical issues; to protest when they meet in public, to hide them away behind bans and block-lists on social media, to lobby when they hold roles with any public voice. Women are silenced to support a lie, built upon a fantasy, shored up by a nonsense slogan.

As Orwell warned us, once the sheep have learned your chant, and you can defend the indefensible, then the war is over. When women have been silenced or cowed into submission, when their rights have been taken, when they have been pushed out of politics and public life, well, that’s when you can say, “Four legs good, two legs better”.

3 thoughts on “Battles of the bulge”