Apology: This is actually a serious blog, without even attempts at humour.  Normal service will resume shortly.

If you haven’t been following Louise Mensch’s Twitter timeline for the past few weeks then, firstly, I wouldn’t blame you – she’s a terrible person – but, more importantly, you may have missed her trying every trick in the book to undermine Jeremy Corbyn’s leadership campaign.

She started treating him as a joke candidate, sporting a Corbyn twibbon on her profile picture and encouraging her followers to do likewise (some of them still do), pre-empting The Daily Telegraph’s disastrous article encouraging its readers to sign up to vote Corbyn.  She has joked about how easy it would be for the Tories to win in 2020 if they faced Corbyn and mocked the opposition being in disarray. 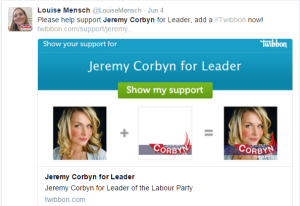 As Corbyn went from rank outsider to unexpected powerhouse her tone changed, she fretted about the need for the government to have a strong opposition, although she never explained why such was needed (to be fair, it may be hard to explain in 140 characters, especially for somebody so strongly behind Cameron and whatever he’s doing).

As it came to light that Corbyn has found himself with supporters who have some decidedly unpleasant views, including holocaust denial, she switched her attention to that and, for all of her faults, she can be incredibly single-minded. Her and her followers have gone to great lengths to root out everybody who Corbyn has ever supported, shared a platform with or met with who may also have been fostering abhorrent views.  Although her blog on this subject has been widely read it didn’t gain the traction she hoped, spark any real interest from the national news or cause the Corbyn campaign any significant headaches.

To keep the ball rolling and apparently ignorant of the maximum ‘an idea is not responsible for those who believe in it’ she has taken to trawling Twitter for any tweet from a Corbyn follower which does not meet the standards she has set.  On one hand her criteria have been extremely broad; anybody who mentions ‘Zionism’ is an anti-Semite, anybody who uses the terms ‘cunt’ or ‘bitch’ is a misogynist, but on the other she has turned up some tweets of truly horrific racism…

And retweeted them…to her 94,000+ followers.  She has given an unbelievably wide platform to these horrible little tweeters and amplified their voices a thousandfold.

As she’s a journalist, not a scientist, there’s been no effort made to see if any of the other leadership candidates have similar undesirables in their followers, nor has that effort been made with any wider group of politicians.  She’s interested only in discrediting Corbyn, not actually determining if he holds the views she’s rapidly and rabidly spreading, or if his supporters are more inclined towards those views than the general population. In most cases she’s not even interested in establishing if the original tweeters are even supporters of Corbyn.  Given that some of the tweets she’s shared include people complaining about Labour’s ‘open door’ immigration policy you have to suspect they’re not from people sharing a hymn-book with Jeremy himself.

As it emerged that a cat had been granted the right to vote in the leadership contest she switched to a last-ditch stand to suggest that the election was hopelessly compromised and should be cancelled and re-run.  Her last hope it seems to avoid David Cameron having to “fight for decency every week across the dispatch box and totally crush Jeremy Corbyn’s vicious ideology”.

In her whirlwind of fury that socialist ideology may have found a toe-hold in UK politics posting a picture of her own search terms is really just a blip of stupidity to finish off her campaign of bullying, muck-raking and doing herself what she claims to hate Corbyn for – giving a voice to anti-Semites.