There is a theory – admittedly one I like – that the people who followed Jesus in his lifetime and proclaimed him the messiah envisaged him as a Davidic messiah; somebody who was going to united the Jewish people, be a general and lead them in reclaiming their lost land.  When he failed to do those things his followers either had to admit that they had been wrong, or come up with an alternative version of events.

They chose the latter; Jesus’ defeat was turned into the triumphant realisation of the plan he had all along, the words of Genesis were twisted to breaking point to provide a rational for his death – original sin – and a mystic element was added to his life.

And so we turn to that other JC…Jeremy Corbyn.

Corbyn was elected to the Labour party leadership by people who truly believed that moving the party leftwards was an election winner. People had, the story went, deserted Labour because they had become indistinguishable from the Conservatives; they had gone to the Greens, or become disenfranchised with politics, or maybe hung out on the fringes of the Lib Dems.

This was the support for Jesus as a military leader, a winner of grand military campaigns, and even as Corbyn is being nailed to his cross a few still cling to it, in the face of all evidence.  A lot of people returned to Labour from the Green party, but the Greens were strong in the middle-class, well-educated, Guardian-reading suburbs from which Corbyn also draws his key support. Every single Green voting Labour in the 2015 general election would have yielded only a handful of additional seats and there are no signs of the army of disenfranchised non-voters coming to Corbyn’s aid. He and his supporters have never had any interest in appealing to Conservative or UKIP voters, who they hate nearly as much as they hate the right-wing of Labour.

Those who know that the hope of a general election win is gone are pushing to create a new story…Corbyn wasn’t about winning a general election, he was about building a social movement, or setting the agenda of politics. Diane Abbott yesterday said it was “Westminster-centric” to ask if Corbyn could win a general election.  Since then this list of his achievements has started circulating: 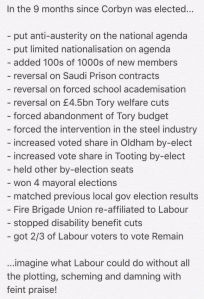 These are the achievements of a rain-maker – one who waits for it to rain and then claims ‘I made that happen’ – and one of them, “matched previous local gov election results”, is an open admission that the policy of bringing new Labour voters to the fold was a failure, but it’s been made-up like Bernard Bresslaw in a Carry-on film and pushed out onto the beauty contest catwalk.

The final paragraph shows that we’re in the end-game. There are, as far as the Corbynites are concerned, no shortage of contenders for the role of Judas. At least 172 of them, as at time of writing. The party as a whole represents the Jewish elders, dragging Jesus in front of Pontious Pilate (Labour voters), claiming that he is a false messiah.

Any day now the final blow will come that transforms Corbyn the man into Corbyn the martyr, the one true hope for a more caring, compassionate, fairer society. The mythology is already forming; Corbyn was a good man, he was a decent man, he didn’t believe in violence, he worked hard for the Remain campaign, he walked a straight line in a world where all around him were corrupted by the great Satan.

Two final points. Firstly, King David and Jesus are treated very differently in the Bible. The former is a very human character, with foibles and failings, the second is barely human at all. There’s no physical description of Jesus, little mention of his family, barely any of his life outside of his ministry. He is a blank canvas onto which those who support him can project whatever they want. This is why one devout follower of Jesus can say he loves us all, while another, equally devout, can claim that “Jesus hates fags”. So with Corbyn. Those who follow him follow the person not his policies, for he barely has any. He has aspirations, but no route to get from where he is to realising them. He is no more than a blank character, a cipher,  onto which each Corbynite implants their own dream of how to make a better world and believes that to be Corbyn’s policy.

Lastly, consider this; Jesus was Jewish. The people he was supposed to be uniting and leading were the Jewish people and it was Imperial Roman that they were overthrowing, but the personality cult that grew up around him lead to 2,000 years of Jewish persecution, as they were labelled ‘Christ killers’ by the church, which itself became intertwined with Roman imperialism.  If you’re a Corbyn supporter and you find yourself calling for the destruction of the Labour party, or the demolition of the BBC for being biased against you, or you’re advocating a Conservative government as a preference to a ‘red-Tory’ Labour leader then maybe it’s time to ask yourself just who it is who’s betraying the left-wing.